5 Things a UX Designer Does

Defining UX design is difficult, even for those who would consider themselves a UX designer. That’s because UX designers typically wear many hats; some more than others. Rather than focusing on what a UX designer is, we’ve written five things a UX designer does so that you can start defining it yourself.

Most UX designers keep a pen and notepad with them at all times. That’s because sketching is one of the most important skills a UX designer should have. UX designers should sketch their ideas consistently because it allows more opportunity to go through more ideas quickly, helps dive deeply into an idea without having to use more advanced tools such as Sketch or Illustrator, and allows UX designers to share ideas with others for discussion and critique.

Conducting good, thorough research is critical in the UX design process. UX design is all about the user. Because of that, involving people throughout the entire process of creating a website or app creates a more user friendly product. Because research is important throughout the entire UX design process, it’s important that UX designers know how to define the problem they are trying to solve for, and talk to people so they can figure out the best solution to that problem.

A persona is a representation of a type of person or group of people. It answers the question, “Who are we designing for?” After conducting research to find out who will be using the product, UX designers typically create a persona to help guide them through all their design decisions. Here is an example of a persona: 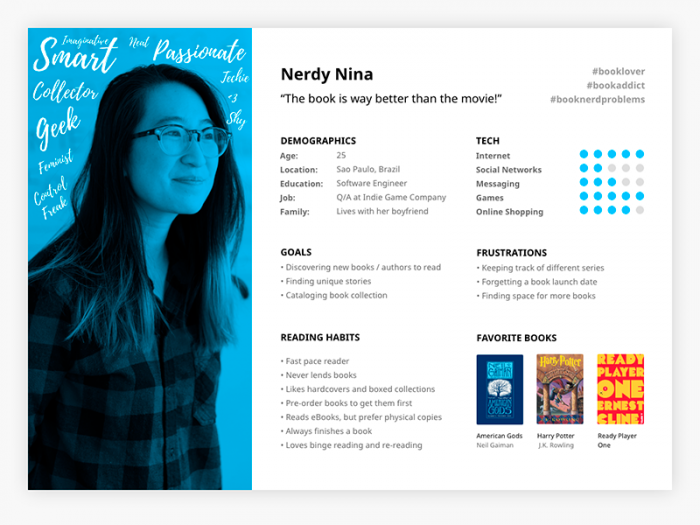 Before creating highly designed websites or apps , UX designers work out their designs with simple sketches, called wireframes, to find issues with user experience, see problems in the overall site layout, and find solutions to how the site should be navigated. UX designers will sketch out and test several iterations of a site with users using wireframes.

A prototype is a model of something that reflects the final product. There are many tools available, such as InVision or Principle, that allow UX designers to prototype their near-final designs. This allows the designer and the user to see the overall flow of the product they designed, and see how the user interacts with it. Often times UX designers will assign a user a task with the prototype to see if they can accomplish it with ease. UX designers find out if they designed their site or app well depending on whether the user can finish the task they were given.