A Programmer’s Best Friends: The Most Useful Languages for Web Development

The world’s first website was launched in 1991. It consisted of little more than a document page explaining the concept of the newly created “World Wide Web” project. In the nearly three decades that have followed since that historical event, websites have come a long way. Static text documents have given way to attractive, interactive pages that respond in real time to user actions. Websites can now intelligently process payment requests and offer advanced security features. They can stream live videos and translate languages at the click of a button. They are our first, most widely used connection to the world around us, and we rely on them for entertainment, education, work and inspiration on a daily basis.

But even though there are now more than 1.3 billion sites on the web, they are, at their core, not too fundamentally different from that first, no-frills site that started it all almost 30 years ago. This is because whether your site is an augmented reality game or a white screen with black text, at its heart, it’s all built on code. 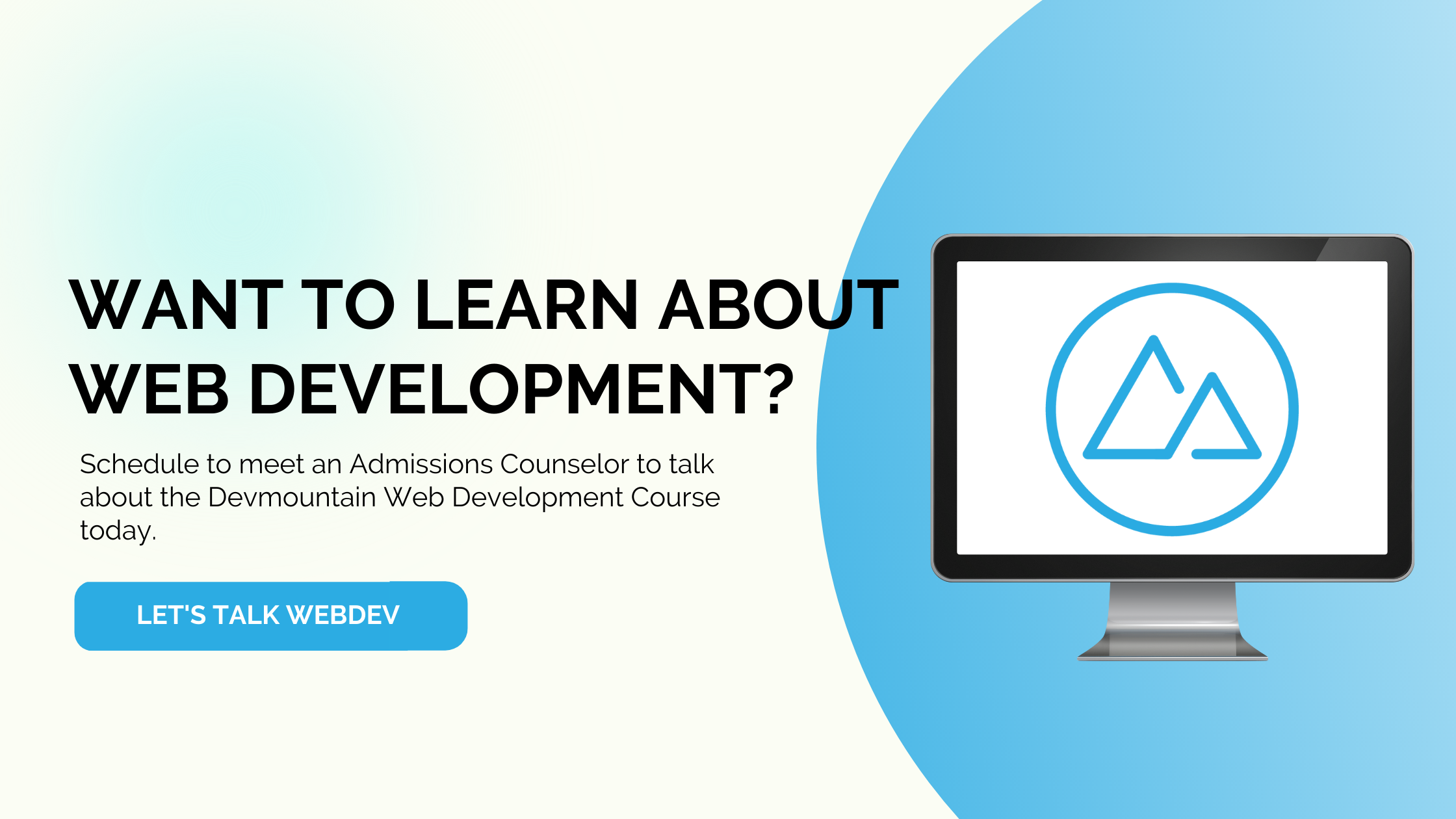 What is web development?

Simply put, web development describes any tasks or processes associated with building or maintaining sites for access over the internet. This includes everything from design, to security, to content, and more. 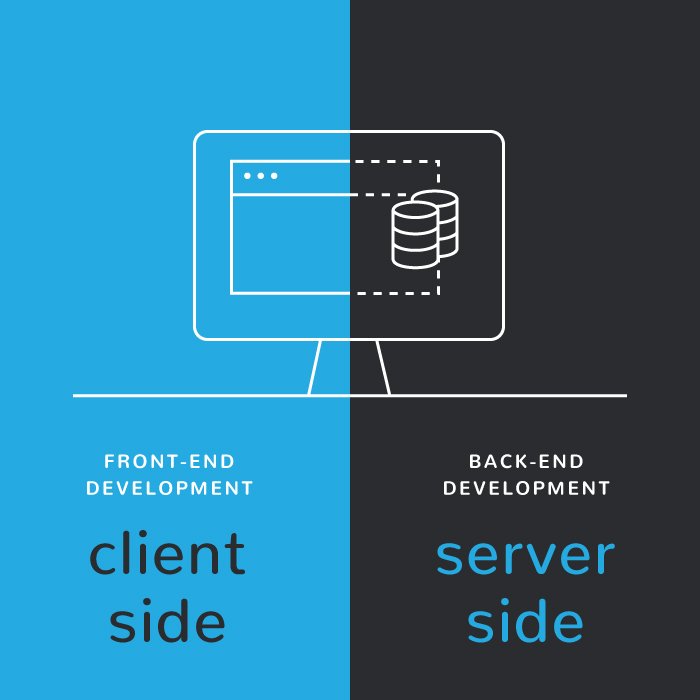 Web development can be divided into two specific areas—back-end and front-end development. Front end (or “client side”) describes any parts that the average user will be able to access. This includes menus, buttons, forms, sliders, and even the fonts of the words you see on the screen. Front end also includes any elements related to aesthetic (such as page layout). Essentially, if it’s there on the page when you connect to the site, it’s part of the front end.

The back end is a bit more difficult to grasp. Back end (or “server side”) describes all of the elements that users can’t access, at least not directly. This includes servers, databases, operating systems, and APIs, all with the purpose of supporting front-end systems.

Front end and back end operate together, with client-side requests getting sent to the back end for fulfillment, and server-side responses getting sent forward to the front end. But while back- and front-end development all rely on code to operate effectively, the best web languages for front-end web development may not be the same ones you’d want to use for back-end web programming.

There are hundreds of different programming languages for web development. But even with so many different coding options, there are really only a handful of languages that should be considered absolutely necessary for web developers.

But why bother with multiple languages at all? Well, the answer is that not every code has the same advantages and disadvantages. Code, in and of itself, is little more than a string of instructions for a computer to follow. This means that most programming languages can be used to perform most programming tasks. That said, some codes are easier to work with for specific tasks, such as those associated with client-side or server-side web development.

So, what’s the best web development language? Whichever best fits your current needs. Here are a few of the most popular front-end and back-end languages: 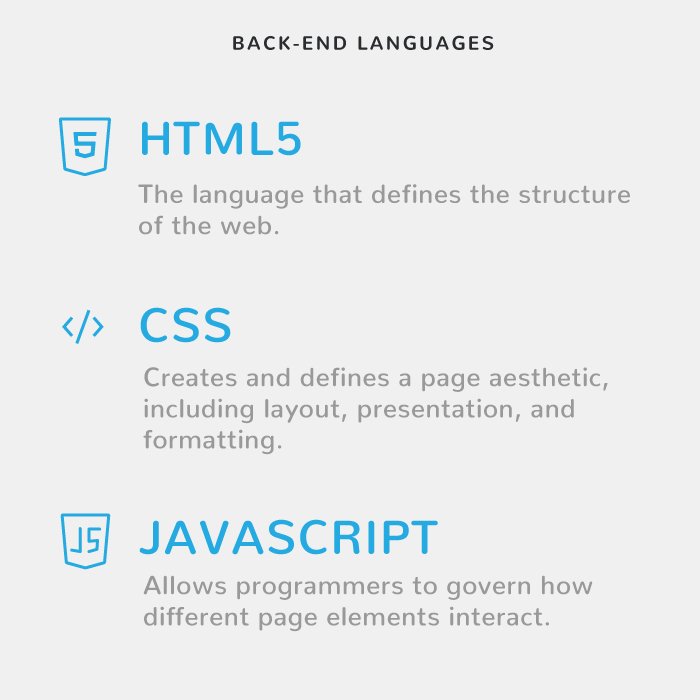 This language is supported across all major platforms and browsers, but more than that, HTML5 is the coding backbone of the entire web. Currently, ~80% of the world’s websites use HTML5. Pages built on HTML5 are compatible across most devices, making it probably the most important of all the front-end languages to learn.

For issues related to design, CSS is the way to go. CSS makes it possible for programmers to create and maintain a visual aesthetic consistently across every device and browser, rather than having to design a separate page for mobile, desktop, and various web browsers.

For improved user interaction and better control of how page elements interact with each other, there’s JavaScript. JavaScript also allows programmers to incorporate automation, animation, and personalization into their designs, for a more dynamic user experience. JavaScript is also versatile enough that it gets to be on this list twice—once as a front-end language, and again for the back end. Typescript is a typed superset of JavaScript that compiles to plain JavaScript. 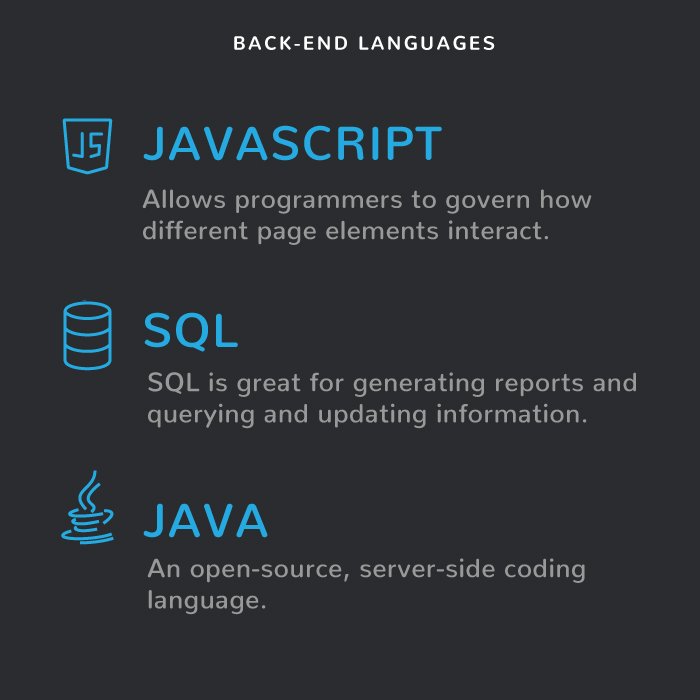 By incorporating the Node.JS runtime environment, programmers can use the front-end designed JavaScript language for server-side development. JavaScript in Node.JS is easy to learn, particularly for developers who got their start working with JavaScript client side. Additionally, by remaining “unopinionated” (not imposing a lot of rules or restrictions) this language gives developers unlimited freedom in server-side coding.

The go-to language for data retrieval, SQL is less of an all-purpose coding solution, and more of a specialized tool. SQL is great for generating reports and querying and updating information.

Java is an open-source, server-side coding language often used for sites that deal with a lot of traffic. It is object oriented, so programmers can use it to build self-contained parts out of classes of commands. It is fast, scalable and requires minimal software maintenance between versions. It’s important that back-end web developers learn Java.

Building the web, one page at a time

So, what’s the purpose of programming? In only a few decades, the web has grown from a single, static page, into something that is truly “worldwide.” But even with 1.3 billion sites and counting, the heart of the web is still code, and those who know how to manipulate that code are in higher demand than ever before.

If you’re interested in becoming a web developer, it’s important to learn the best languages for website development. And by learning a handful of programming languages, you’ll always have the best tools at your disposal, no matter the situation. Join the web development community by learning how to code.