Alumni Spotlight, Michael Sacks: From iOS Development Bootcamp to Starting His Own Business

You’ve heard it before: coding bootcamp is no walk in the park, but it’s worth it. We often hear stories of why it’s worth it from our students, and we like to share their experiences with you. Here’s Michael Sacks’ story: once a DevMountain student, and now the CEO and cofounder of a men’s clothing and accessory retail app—Cayenne Clothing.

An Introduction to iOS Development

“I really wanted to learn native mobile because that’s where everything is going,” Sacks said. So, he started looking into coding bootcamp options.

The Search for a Coding Bootcamp

Being from California, Sacks was heavily considering a coding bootcamp in San Francisco. But, he applied to a few other places to keep his options open. He was accepted to a few, one of them being DevMountain. In the end he chose the iOS Development Course at DevMountain.

“There were a few reasons why I chose DevMountain. One being the free housing; the free housing helped [my decision] a lot,” Sacks said. “DevMountain [also] has the longest program, so I was getting the most bang for my buck. And it was entrepreneurial friendly. I always knew I wanted to do my own thing, not just find a job once I learned the skill set.”

Moving to Utah wasn’t too difficult for Sacks; he had been there before and knew he’d eventually like to come back. Coming to DevMountain in Utah was his chance to check out the Utah tech scene.

“I was very fortunate in the housing situation,” he said. “I had four other roommates and they were great people. We talked a lot and still do. That communication helped a lot during the course. We would go home at night and help each other with questions we had.”

“Having someone there that was a recent student was very valuable.”

Although not feeling like he was exactly where he wanted to be to start his own mobile app business, Sacks said DevMountain provided him the framework he needed to get there. He just needed some more experience on a big project so that he could learn other details they didn’t have time to cover during bootcamp. That’s when he joined Jane.com as an iOS developer and became a DevMountain mentor.

“DevMountain made me a very teachable employee.”

After spending nearly two years with Jane, Sacks had acquired enough experience and connections to get started on his own business.

Nearing his end at Jane, Sacks convinced a fellow coworker to quit with him to get started on a project he’d been considering since high school—an app that allows men to discover new brands and buy clothes in the most convenient way possible. He asked another friend of his to join the team. Then, the three of them moved to San Diego, saved up some money, and started building their business.

“[A lot of men] don’t like to drive to the store and try to find new clothes,” Sacks said. But, he expressed, these men often like to dress well. So the three friends built their app—Cayenne Clothing—to bridge the gap between no time to shop and dressing well.

“We have two different types of guys we target with Cayenne,” Max Gleicher, cofounder of Cayenne, told San Diego Community Newspaper Group. “We target the guy who is intrinsically motivated to dress well—the one who doesn’t necessarily prioritize the mall, but who cares about dressing well and enjoys receiving compliments on their outfits.”

“And then we have the guy who doesn’t have any idea of what to wear, how to wear it, or where to get it. He thinks that a great pair of pants will just magically appear in his closet.”

Every day, the Cayenne app showcases a new item of clothing for purchase. If the user likes it, they have the option to buy right then. It takes ten seconds, and you can view and purchase the item within the app. And, the items of clothing are typically 10-20% off MSRP. 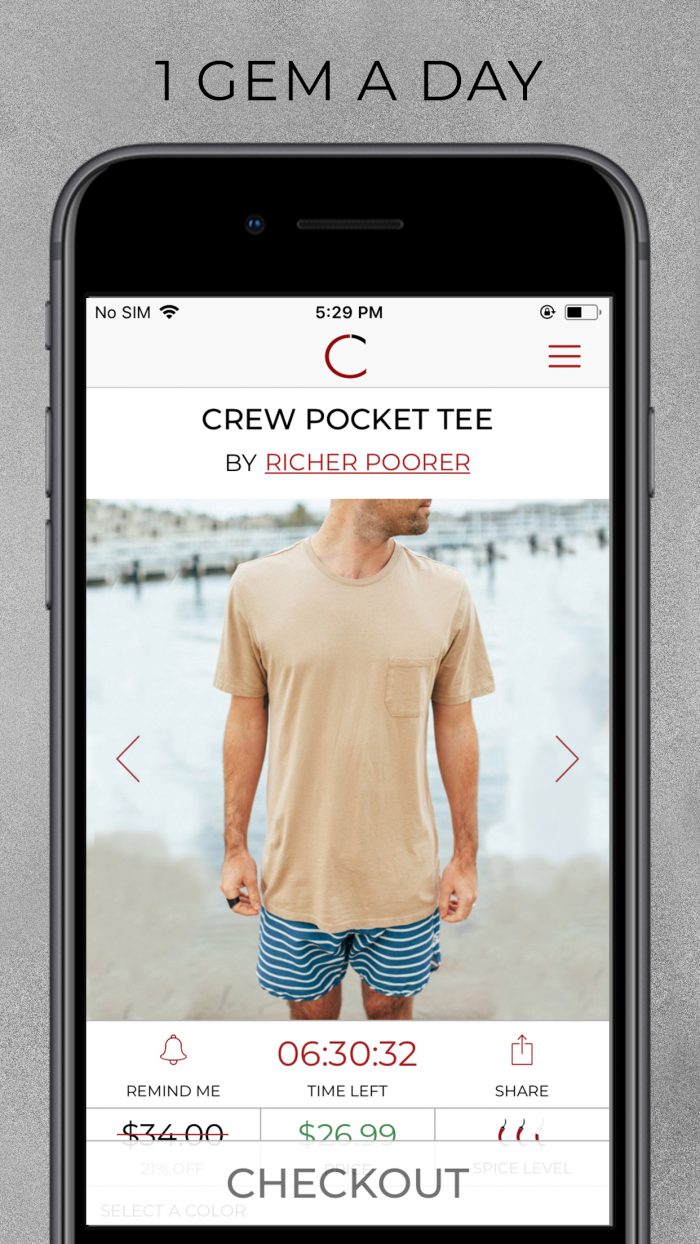 Most of the clothing comes from small-to-medium-sized brands that are looking for more ways to market their products.

“Some brands are really open to the idea [of showcasing their items on our app],” Sacks said. “Some are not. …But I think a lot of them like the idea of putting their stuff on technology. Being the only brand that’s showcased for the day means they won’t have to compete on similar tech platforms like Amazon.”