Programming Payoff: Is a Coding Bootcamp Worth It?

Even as demand for computer programmers increases, the number of U.S. college students who pursue science degrees is only 2.5%. That isn’t a lot, and it certainly isn’t a lot considering that this number has remained virtually unchanged since the early 80s. Computer skills are in high demand, and those who have them—specifically, those with programming skills—will find that their career prospects are nearly boundless. That said, many prospective programmers are turned off by the large amounts of time and money that go into getting a college education, and eventually ask; can you get a programming job without a degree? The good news is that college isn’t the only path to programming success; coding bootcamps offer another possibility.

Coding bootcamps are intensive, short-duration courses that are designed to give students the knowledge and experience they need to begin careers as programmers.

They general bootcamp cost is quite a bit less than earning a full degree, and usually take three to four months (rather than two to four years) to complete. In 2017, it is estimated that approximately 23,000 students graduated from coding bootcamps. But while that number is certainly impressive, it doesn’t answer the question on every prospective programmer’s mind: Is coding bootcamp worth it? 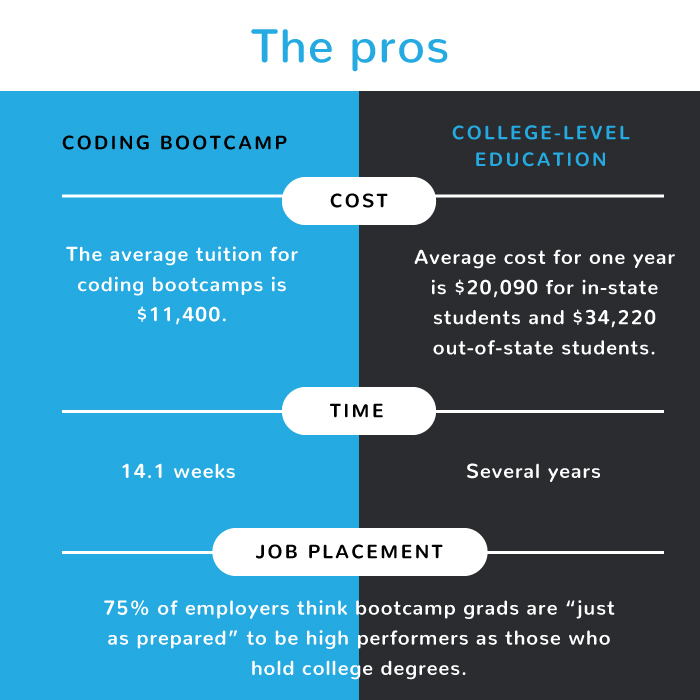 As previously mentioned, earning a computer science degree can be expensive. Specific costs vary depending on a variety of factors, but the average cost for one year of college-level education for in-state students is $20,090. That number jumps to $34,220 for out-of-state students. Multiply that by probably at least four years to earn a bachelor’s degree, and those expenses really start adding up.

Coding bootcamp cost is low considerably. The average tuition for coding bootcamps is $11,400. And given that bootcamps offer complete curriculums condensed into a single course, students don’t have to worry about recurring costs.

Time to certification is another thing to consider. Prospective programmers who want to get into the job market quickly can be thankful that coding bootcamps only require 14.1 weeks on average to complete, rather than several years.

But certainly college-educated job applicants are more likely to be hired than candidates from coding bootcamps, right? Actually, not really. In fact most employers (75% according to a recent study) think bootcamp grads are “just as prepared” to be high performers as those who hold college degrees.

So, to recap: coding bootcamps vs cs degrees cost less than a college education, require much less of a time commitment, and produce graduates that are just as capable and attractive to employers. But is there a downside? 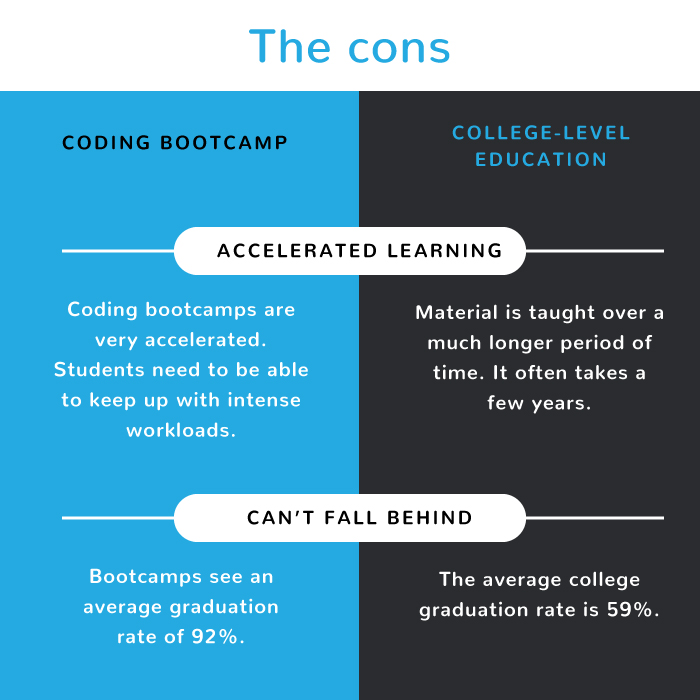 There is. Given the massive amount of material that needs to be covered in a relatively short amount of time, coding bootcamps are very accelerated. Students need to be able to keep up with intense workloads and build off of new concepts even as they learn them. To put it bluntly, bootcamps aren’t something that participants can stroll through; they’re called bootcamps for a reason, after all, and even if your instructors don’t fit the stereotypical “drill instructor” mold, you’ll still be expected to push yourself, hard.

As we mentioned before, most coding bootcamp courses last about 14 weeks. That’s shorter than a single semester at most colleges. During that time, you’ll be studying and applying new and difficult concepts at an accelerated rate. If you can’t maintain that pace, it will be difficult for you to catch back up. And this isn’t public school. If you fall too far behind, you may get left behind.

That said, most (if not all) students do make it to graduation. According to a report by the Council on Integrity Results Reporting, bootcamps see an average graduation rate of 92%. When compared to the average college graduation rate (59%), this actually speaks in favor of bootcamps as a viable education option.

When comparing the advantages and disadvantages, it certainly looks like coding bootcamps are worth the investment. To further support this conclusion, consider that 80% of bootcamp graduates find work at careers that require the technical skills they learned at bootcamp, and enjoy an average salary increase of 50.5%. Additionally, the average starting salary after coding bootcamp is $70, 698, which, considering the low cost of tuition, suggests a significant return on investment. 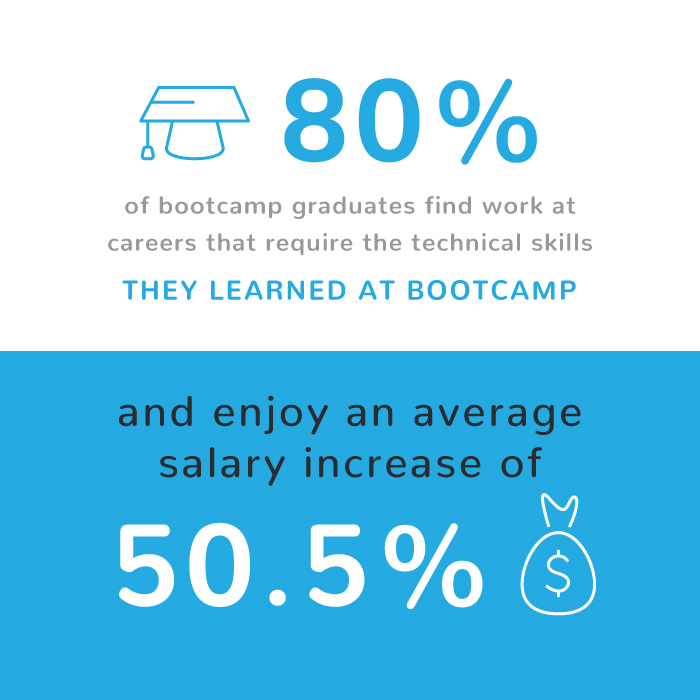 But before you go rushing off to enroll in the first bootcamp you find, you should know that not all bootcamps are created equal. Some curriculums are more limited or outdated, and some bootcamps make promises (particularly about job placement) that they fail to fulfill.

If you’re interested in learning programming from a coding bootcamp, make sure you do your research. The Council on Integrity in Results Reporting (CIRR) is a good place to start. CIRR reports on things such as graduation rates, job-placement rates, and base salaries of dev bootcamp graduates, giving prospective students a more clear idea of the quality of the courses in question. Student reviews can be another good source of insight.

Still, when all is said and done, the most important variable to consider is yourself. Do you enjoy coding? Are you willing to put in the time and effort? If not, then the answer to the question, “Are coding bootcamps worth it,” will always be a resounding no.

Get to know yourself and see how well suited you are to programming. Free online coding aptitude tests and tutorials can give you a taste of what you have in store, so that you can approach your future with confidence.

The bottom line is that, yes, coding bootcamps are worth it, but only is you choose one that is reliable, and only if you are ready to make the commitment. If you do, and if you are, then there really isn’t a more direct path to programming success.

The world needs programmers, and if you are interested in filling that need, then coding bootcamps can definitely make it happen.