Talk the Talk: What’s the Best Coding Language to Learn?

As technology continues to grow more sophisticated and innovates nearly every other industry, learning code is increasingly in demand. The value of such a commodity cannot be overstated. After all, it’s imperative in the creation of apps, software, and websites of all kinds.

However, there’s no one-size-fits-all coding language. Each one is developed according to the unique features of the tool for which it will be used. Since technological tools exist in a huge variety of forms, there are more than 10 programming languages. In fact, there are hundreds of coding languages.

Obviously, it would be nearly impossible to master each one. The trick, then, is knowing what coding language to learn to maximize employment opportunities and gain a general understanding of how best to utilize up-and-coming tools. To find the best language for web development, you should first consider your options.

Front-end coding is as common as it is indispensable. It defines how an application, website, or program looks and feels to the user. All the small factors that make a tool appealing to the eye and easy to navigate are put together by front-end web developers. 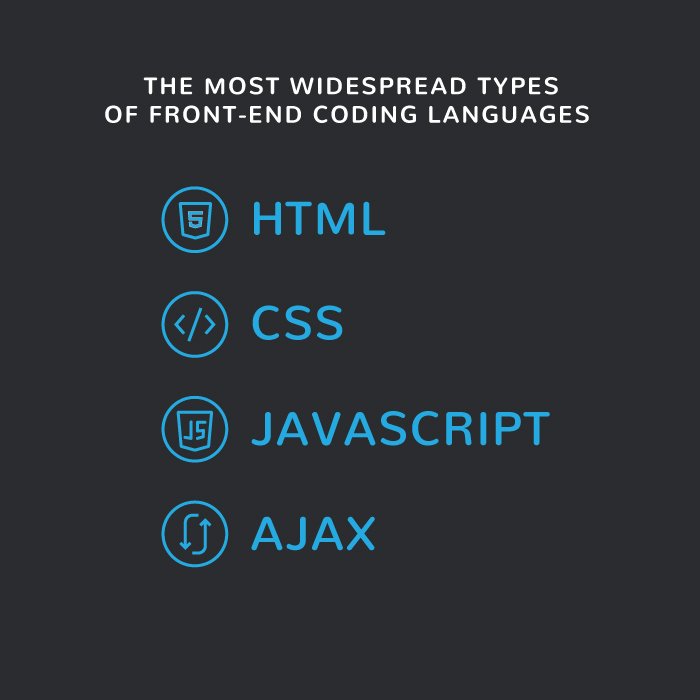 The most widespread types of front-end coding include:

Responsible for keeping track of a user’s location, playing videos, and presenting graphics (to name a few functions), this code is one fo the most basic languages available. Thanks to its omnipresence throughout the Internet, any browser that can read this kind of code should ensure that a website works perfectly. Even those who know next to nothing about coding have usually seen HTML5; it consists mostly of words, numbers, and symbols sandwiched by <and>.

This code is best known for maintaining the layout of web pages and shortening load times. It excels at its purpose by requiring less actual coding than, say, HTML. Want to mess around with a website’s color, page width, or border? This is the language to use when doing it.

To give users the satisfying experience of interacting directly with a website, JavaScript is the go-to for master coders. Basically, anytime something needs to move, this is a language that can make it do so. Because of this language, things like alert boxes and animations are possible.

Using the best of each of the aforementioned coding languages, Ajax can send, receive, and request data from a server efficiently while keeping up with all other aspects of front-end coding. If it’s necessary to retrieve information from a database or another code, Ajax can do the job.

While there are still many other kinds of front-end coding to master, these four are guaranteed to help get anyone’s foot in the door.

What You Can’t See

If front-end coding deals with everything that a user sees, then back-end coding takes care of all the invisible details. Specifically, it covers the intricacies of communication between a browser and a database, ensuring that the application, website, or program functions properly. 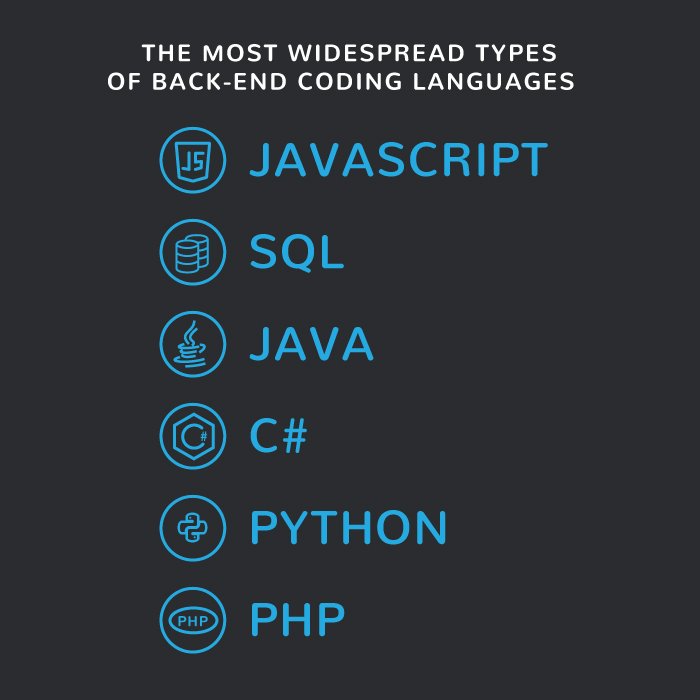 In terms of back-end coding, JavaScript can come in handy for such necessities as storing data and improving security. Although it’s obviously most visible when it’s used for front-end development, JavaScript wouldn’t be complete without the back-end attention that lets it work its magic.

When it comes to making sure that databases and servers communicate effectively with each other—in other words, facilitating relational database management—this is the standard language to know. Examples of SQL abound in every industry. Anything that requires retrieving information from a database is relevant to SQL. In other words, nearly everything is relevant to SQL.

Applications or websites that are especially sophisticated or experience a high level of traffic benefit the most from Java. Android apps are especially known for using it. In some apps, Java can create the interface.

What this object-oriented language aims to do is make complex features and computations easy to put together. It’s useful in just about every type of technological tool yet invented. Arrays, inheritances, sorting, conversions, delegates, and so many more features thrive on C#.

Need something done quickly and with little in the way of pomp and circumstance? As one of the oldest coding languages still in use, Python is designed to be fast and simple. Tasks like keeping track of dates and times or making calculations only need Python to be achieved. Despite its age, this language is as reliable as ever.

This language is best when partnered with HTML, as it’s meant to aid with web development. It’s essentially a simple way to write script for websites, although the script itself does not manifest on the front end, thanks to its dependence on the server. An especially interesting example of PHP is its usefulness in echo commands, which are basically directions given to a computer so that it does what the user needs.

Those who enjoy the hidden details of life—the “backstage crew” of the world, so to speak—may find back-end coding is the best suited for their interests. There’s surely no shortage of need for it.

There are many more front-end and back-end coding languages you could learn—languages such as React Native, Node.JS, Kotlin, or Solidity—but the languages listed above are the most common and applicable for software developers.

What Are You Waiting For?

For anyone who wants to learn coding languages and be a software developer, these are all great places to start. Nowadays, there are a number of services and bootcamps that can teach the basics to those who are interested.

In any case, there’s no imaginable disadvantage to figuring out how to code. Whether these languages are used at home or at work, the persistent and increasing prevalence of technology that utilizes these codes means that being able to speak their languages will always come in handy. The more one learns, the more the world opens up, both in private life and the realm of employment.

If you aren’t interested in learning how to code, consider a career in test automation, or QA testing. You’ll still learn something technical without learning the ins and outs web development.