How to Start Programming

What can you do with coding? You can become a valuable resource to employers or even become a freelance developer. As the coding industry is exploding, learning coding skills has become an increasingly good idea for job security and career success. And the salary levels aren’t bad either. But do you need a degree to be a programmer?

The most obvious path to starting a career in programming is through a computer science (C.S.) degree where one would learn a web development language (like JavaScript, Java, Python, and Ruby to name a few). But, it might surprise you that it’s actually more common for people to look into a coding bootcamp vs. a CS degree.

Did you know that the number of U.S. college students who pursue coding degrees has been hovering around 2.5% since the early 1980s? Considering how much the tech industry has grown since then, that should shock you. 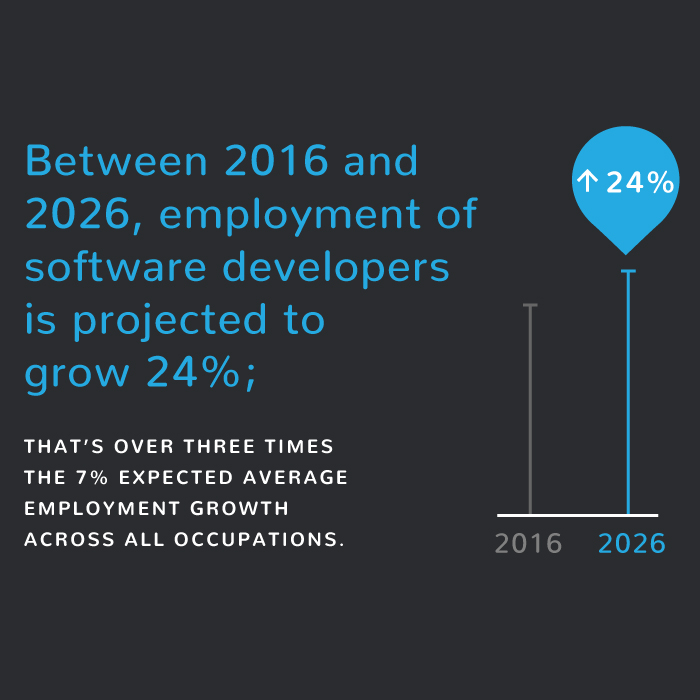 According to the Bureau of Labor Statistics, employment of software developers is projected to grow 24% between 2016 and 2026. That’s over three times the 7% expected average employment growth across all other occupations.

We know that more programming language related jobs are being created every day, so why aren’t we seeing an increase in students who pursue a C.S. degree? This could be because many people have learned that you don’t need a degree in coding to start your programming or software developer career.

While a C.S. degree provides a well-rounded education for any aspiring web developer, there are a few disadvantages that you should be aware of. First, getting a degree in coding is a big time commitment for beginners learning how to code. In the modern education system, it takes two to four years to finish a degree in coding, depending on how much time you dedicate to your studies.

Consider your cheapest option—$9,970 for in-state residents at public colleges. It will cost you $39,880 total to finish a four-year degree in coding.

However, there are also some advantages to consider when thinking about going to college. The biggest advantage being that you get a degree in coding. But, is a degree really necessary?

What a Degree Does for You

A degree is physical proof that you put the work, sweat, and tears into learning how to code. So, do you need a degree to be a programmer? Sometimes you do. Some companies remain traditional, meaning that they won’t consider you for a coding position if you don’t have a C.S. degree. However, this is becoming the exception. 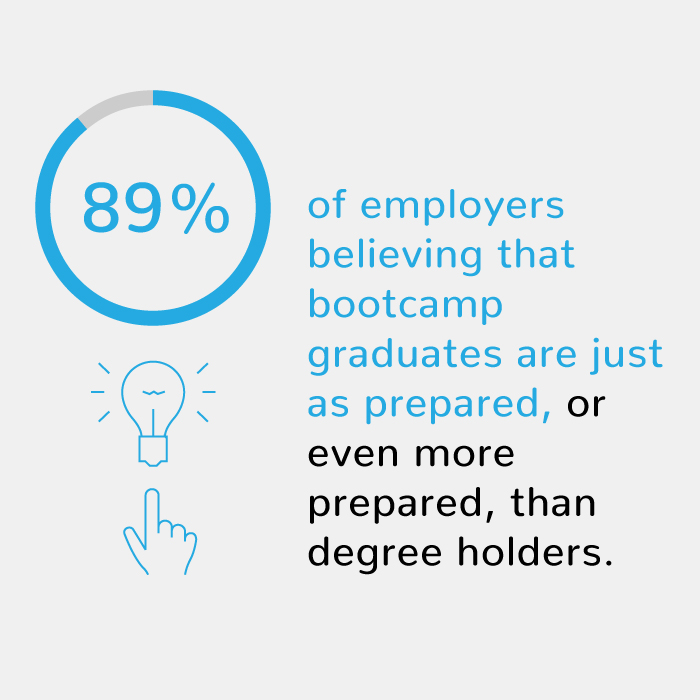 Alternative certification routes are becoming more respected. In fact, according to the data we have on the employer’s perspective 89% of employers believe that coding bootcamp graduates are just as prepared, sometimes even more prepared, for a career in coding than degree holders.

When others say you can’t get a programming job without a degree, that’s simply untrue.

Who Modern Employers Are Hiring

Aside from proof that you actually know how to code, employers are also looking for how you will fit in with the rest of their team.

Employers today have different expectations and hiring processes than they used to.

As mentioned above, hiring managers aren’t just looking for a degree in coding. They are looking at portfolios showcasing your web dev build skills and coding tests.

Coding bootcamps can be helpful as you prepare a strong portfolio and can get you the skills you need to be able to ace coding tests that employers will give you.

Contrary to C.S. degrees, coding bootcamps are inexpensive and can get you tutorial or in-person guidance and any additional resources you need to learn how to code quickly. The average tuition cost for a coding bootcamp is $10,000 – $15,000, and it typically takes 12 – 26 weeks to go through a course.

Because coding bootcamps are preparing you for job interviews, you will be learning how to code while also preparing a portfolio that you can present to employers at the end of your time at bootcamp. These portfolios will contain the projects you’ve worked on (apps, websites, tools, etc.) you’ve built as you’ve practiced your web development skillset. And while coding bootcamps don’t offer degrees, they do demonstrate to employers that you have an educational foundation to your coding experience.

Remember, 89% of employers believe that coding bootcamp graduates are just as prepared, or even more prepared, for a job in coding than degree holders.

Do You Need a Degree to Be a Programmer?

Do you need a degree to be a programmer? You can only answer this question by first figuring out what your personal goals are. Are you wanting a well-rounded, traditional, school education? Then yes, you do need a degree. Can you get a programming job without a degree? Yes, you can. If you are more interested in beginning a career in tech quickly, then you don’t necessarily need a degree in coding. Coding bootcamps can get you the skills you need, in a much more affordable and time efficient way, to start your career in coding.